Astellia Online is an upcoming MMORPG or ‘massively multiplayer online role-playing game’ with a monster card system in which players collect and combine cards to call forth powerful companions into battle. The companions are critical parts gameplay as they determine the style of a player’s combat through the varying buffs, debuffs and abilities that each one can provide like crowd control, tanking, heals and more. 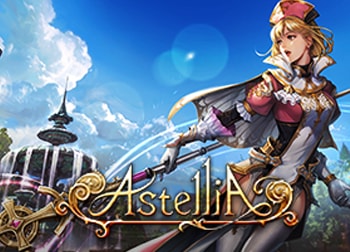 While enemies are dealing with the devastating AoE attacks of the Mage, the Assassin specializes in agile, cunning attacks. He seemingly appears out of nowhere by using subterfuge to lure unaware opponents into ambushes. His attacks inflict damage over time with poison and bleeding effects before he executes furious and deadly finishing combos.

The Assassin’s goal is to get in — and get out — of toe-to-toe battles with enemies, before they can react. To do so, he is able to Blink behind a foe to attack them from behind. He can also use the same speed in a Spectral Dash attack that sees him charge forward in a line to attack all targets along his trajectory. If he finds himself in trouble, the Assassin can use Smoke Screen to increase his evasion (and that of his allies), doubling as a means of escape should the fight turn disadvantageous to him.

The Assassin also harnesses the power of Scorpio and Link Astels. Blink triggers Shadow Blitz, a deadly attack that teleports her behind the target to perform two powerful scorpion sting attacks. The damage is increased when behind the target. Spectral Dash sets off Shadow Assault, causing Link to teleport behind his enemy and let loose a flurry of five dagger attacks.

The Mage, as one might expect, is a master of the elements, each one used to create a maelstrom of damage to enemies. Alternately, Mages can summon the elements to create protective barriers when the tide turns and can even teleport short distances to regroup before unleashing the storm again.

The Mage is a specialist in large devastating AoE attacks. Whether it is calling a massive Hellfire explosion or a slowing, freezing Blizzard, the Mage can transform the battlefield in the blink of an eye. For more targeted damage, the Mage sprays a Fire Stream in a cone in front of her. Those unlucky enough to be within range will be damaged.

The Mage also draws on the power of Astels, such as Canceria and Sirius, in order to unleash powerful, tide-altering combinations. Hellfire has the ability to trigger Holy Circle, a powerful AoE attack created from the light itself and that detonates to inflict damage to all targets within range. Fire Stream and Ice Hammer unleash the fury of Blinding Light, a powerful flash of light that blinds all targets within range while simultaneously reducing the threat of the caster. Allowing the player to chain high damage attacks, while not drawing aggro away from the group’s tank.

Primarily a ranged damage dealer, and one of the most powerful single-target slayers in the game, the Archer excels at whittling down her foes’ health from afar – often leaving them dead or dying before they even have a chance to get within striking distance. With exceptional acrobatics and and a variety of different traps and snares, the Archer can also make sure their prey is unable to chase them down. But beware, if caught unaware or surrounded by too many foes, the Archer’s lighter defenses and armor will not last long.

Using a skill like Hammer Shot, the Archer can concuss an enemy, stunning them long enough for them to get in a few more damaging shots, or perhaps using it as a means to get some distance between the Archer and its prey. Similarly, the Archer can use a skill called Evasive Arrow, during which the bowman shows off their mobility by performing a backflip and unleashing a barrage of suppressive fire that slows down any enemies caught in the fire. And if facing many enemies, the Archer can use their Maelstrom Arrow, which creates a whirlwind at the target location and pulls all enemies into the center, hindering their ability to move for a time.

Armed with both their sword and shield the warrior is the vanguard of the group. Taking on the responsibility of the tank they provide their body as a shield for others. Their defensive specialization allows the warrior to command the flow of the battle providing their comrades with a tactical edge. When faced with overwhelming odds they can also call upon their Adamantium Shield skill which increases their defense but prevents the use of other abilities.

Besides sheer brawn, the warriors have additional tools to shape the battlespace. With their Multi-Chain ability, warriors can launch a hooked chain in front of them to impale their targets pulling them in close for the kill. They can also make use of Quake slamming the ground causing an area of effect knockdown with damage.

Calling upon the assistance of the Astels warriors are able to perform powerful combination attacks. Draco, a dragon-like Astel, will perform the Split Breath combo attack. Shooting a frontal cone of flames, causing damage to all targets and dealing increased amounts of damage to targets that are either knocked down or stunned. This makes the warrior’s Quake ability all the more potent. Serpens will empower the warrior’s Multi-Chain ability by creating a Toxic Cloud enveloping chained enemies in a pool of gas poisoning them and inflicting continuous damage.

In contrast to the warrior, the scholar specializes in group support and healing. While the warrior is busy running headlong into battle the scholar is focused on keeping the warrior and the rest of their group alive. Abilities like Bless allow the scholar to continuously heal the hit points of all party members with holy power infused Atra. However, scholars are fully self-sufficient and when not focusing on using their powers to cure or restore others they can twist their knowledge of Atra to create destructive forces and smite their enemies.

The scholar does more than add hit points back to other player’s hit point pool. They too can also manipulate enemies on the battlefield allowing their allies time to regroup or outmaneuver their foes. Hurling a bolt of energy at their enemy through the ability Arc Slow reduces their enemy’s movement speed. Scholars can also call upon their strengths to cast Divine Shell granting a holy barrier to all party members near them raising their defenses.

A few key Astel combos available to the scholar greatly enhance their crowd control and healing abilities. Kitsune will cast Recovery on Divine Shell providing a continuous heal to the party members by infusing them with powers of the moon. Pisces will cast Aqua Bubble on targets hindered by Arc Slow trapping the targets within a water bubble, further hindering their movement and preventing the enemies from using some of their skills.

Korean MMORPG Astellia is set to launch on the Steam platform on January 30th ...
Read More

Fantasy MMORPG Astellia is now set to officially launch in the West on September ...
Read More

I really wanted to play this game but i don’t know how to get the launcher working im having serious problems and iv given up . shame 🙁