FlyFF (Fly for Fun) is a fantasy MMORPG or ‘massively multiplayer online role-playing game’ in which the most efficient way to progress is to work with other players in parties to level up by killing monsters that are spread throughout the world of Madrigal. Madrigal consists of a set a cluster of floating islands. Players can maneuver between them through various means including walking, teleportation and flight. 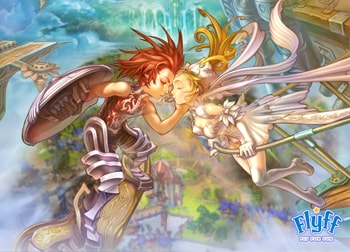 The Story of Madrigal and the Three Clown Gods

There were once 5 beings of limitless power that, struck by a strange mood, decided to create a world full of magic and inexhaustible energy. They met and laid the foundations that would define the world they were to build.

– They created Water, for life to flourish.

– They created Earth, for life to grow.

– They created Wind, for life to breathe.

– They created Fire, to temper the souls of the world’s inhabitants.

– They created Lightning, to remind those that watched the skies that they were not alone. They then created this land, and called it Roika

Life in the world known as Roika was very good for a long time. The Human Race was made and spread across the world—they began to grow and proliferate. The Creators smiled at the life they had created and continued to bless Roika’s inhabitants.

Over time, however, the humans grew lonely and begged the Creators to give them companions. They wished for friends they could turn to in times of difficulty. Benevolent as always, the Creators then brought life to the Dwarpets—short but stout and skilled humanoids that possessed many useful secrets. Happy, the Dwarpets and Humans developed the rest of their world and lived in harmony for many generations.

All things seemingly perfect, the Creators soon grew tired of watching over the life they had created. They prepared to leave Roika forever with the intent of returning home. The Dwarpets and Humans begged the Creators to stay. “Sadly,” the Creators said, “we cannot. But we will leave someone to watch over you.” The Creators then created the powerful Rhisis—a being in the likeness of the ones who made her. She was then bestowed with the duty to protect all life on Roika. Rhisis watched the land for thousands of years, but each year she began to grow more and more lonely. The pain of being left behind with no equal, no companion of her own began to occupy her mind…

Chapter 3: War of the Gods

One day, Rhisis drew energies from three aspects of herself and created the Three Clown Gods.

She created Bubble, who represented Rhisis’ joy and purity.

She created Shade, who represented her fear and rage.

She created Iblis, who represented nothing more than her apathy and neutrality.

Shade, feeding on the very aspect she was created from—Rhisis’ anger, set about to destroy Roika and the mortals who lived there. She furiously severed a section of Roika and sent it afloat. She had hoped that the people living on this chunk of continent would soon perish. However, this chunk of land became known as Madrigal, and with their own ingenuity and the help of the Dwarpets, the Humans survived, rebuilt their cities, and began to strive once more.

Shade, enraged that she had failed, created a race of creatures known as Masquerpets. She sent them to destroy the people of Madrigal.

Hearing the sounds of battle and disapproving of Shade’s actions, Bubble knew he had to intervene. He struck out at the Masquerpets with such might that he split Madrigal into 3 main continents and scattered the Masquerpets throughout them.

Iblis, uncaring, simply watched and did nothing.

Not much is remembered from this time, but Ancient stories speak of eight brave Heroes that stood up to Shade and her Masquerpet army. It is said that they sacrificed their own lives to defend the inhabitants of Madrigal, succeeded, and that the mortals of Madrigal had won.

Ages passed and the people of Madrigal began to grow strong and to once again thrive. Unfortunately, peace was never quite realized and Shade’s evil Masquerpets still roam the lands. Inspired, however, by the legends of the old Heroes and knowing full well that Madrigal is far from safe, they now train themselves to inevitably face Shade’s Masquerpets and to prepare for the day when Shade herself will return to destroy them all…

More than half of all MMORPGs make their debuts in countries somewhere in Asia ...
Read More