Project Gorgon is an indie developed MMORPG that is focused on providing a high-quality Player vs Environment experience. The game goes against a lot of the typical convenience features seen in other new MMOs to come out in the recent years like auto-pathing and offers a more old-school MMORPG experience reminiscent of games like Asheron’s Call and EverQuest. It’s brought to life by Eric Heimburg and his wife Sandra Powers. Eric Heimburg and Sandra Powers have extensive experience working on MMORPG such as Asheron’s Call 1, Asheron’s Call: Throne of Destiny, EverQuest II and Star Trek Online.

As with most MMORPGs, we start the game by selecting our race and choosing physical traits. There are three races in total, each with their own racial benefits. The appearance customization is not anything impressive for now. Variety is lacking with just a handful of options for skin and hair.

Players are introduced to the combat early on in their journey, which by itself may look simple, but is actually intricate and interesting. The actual fighting is tab-target with no dodging, tumbling, or action controls. It is more reliant choosing which abilities your character will use before a particular scenario.

In Project: Gorgon, you don’t get skills tied to your character’s level. Instead your accomplishments and actions in the game grant and improve the stats and abilities you can use in combat or as utilities. For example, leveling fishing grants the ability to jab your enemies with fish guts, fighting with no weapon to level up the unarmed combat tree gives you kicks and punches and learning to use first aid kits allows you heal and cure your allies. It’s pretty cool because, say you want be a mage, you have to actually go out and talk to NPC’s or other players to find out where you can get started with learning magic. Do you want to be an archer too? Find a bow merchant and learn to make arrows. Granted, you cannot you have a bow or sword equipped in your hand already, you’re unable to use unarmed skills that require your hands to be free like punches. 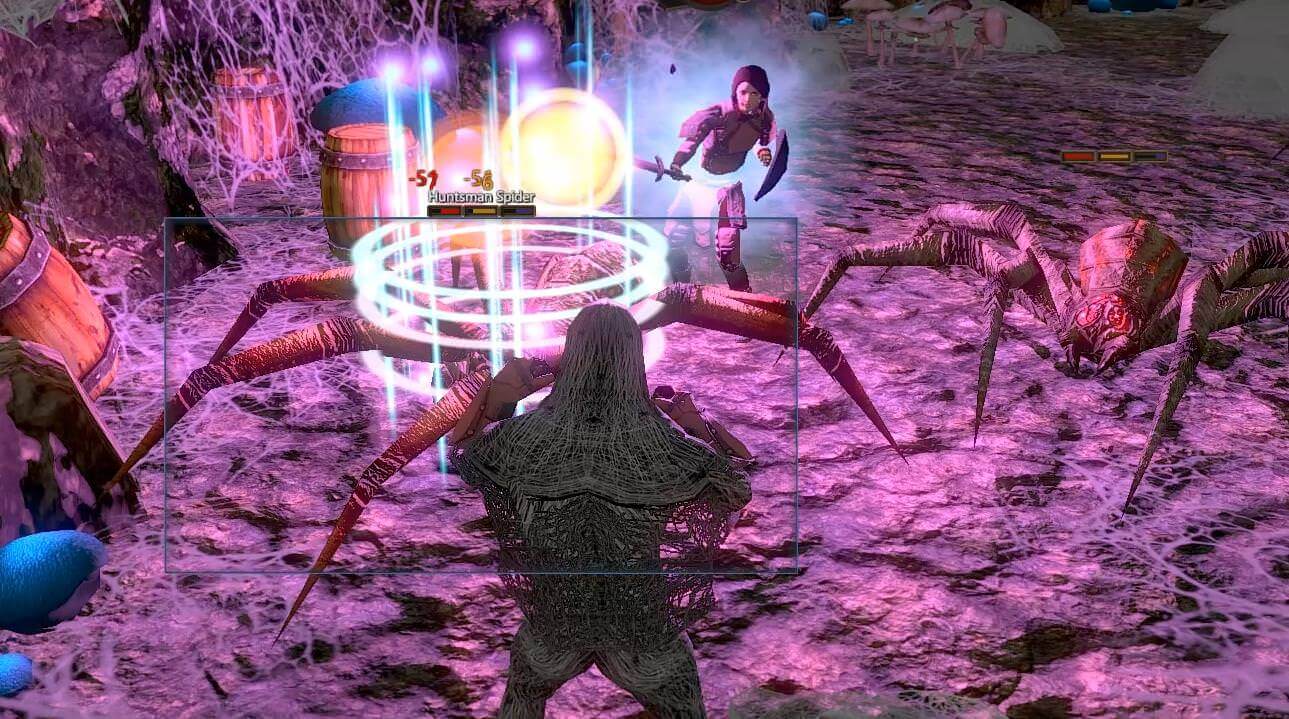 The game world is very much alive with your character benefiting and developing from everything around you. One thing I’m not very fond of with combat is that you do need to eat in this game regularly so that your character does not eventually starve and perform very poorly in combat. I understand the immersion factor of it, but to me it just seems like a hassle to have food as a vital part of a fantasy adventure and maybe shouldn’t have as much of a negative impact to combat performance. Inconvenience does not always mean better immersion.

NPC interactions take a huge part in Project: Gorgon’s gameplay. NPCs are as much a part of the world as the players in it. Each NPC in the game has its own personality, likes and dislikes, so how you talk to them and what you do around them matter. For example, if you try to offer a chicken to a vegan NPC, they may call you rude and probably charge you more for the goods they sell or even give you misguided information. If you walk into a shield loving NPC’s home with a top tier shield, they may offer you a discount on your next purchase for sharing something cool with them. Your actions affect how you’re treated by the world and sometimes that can have harsh consequences. 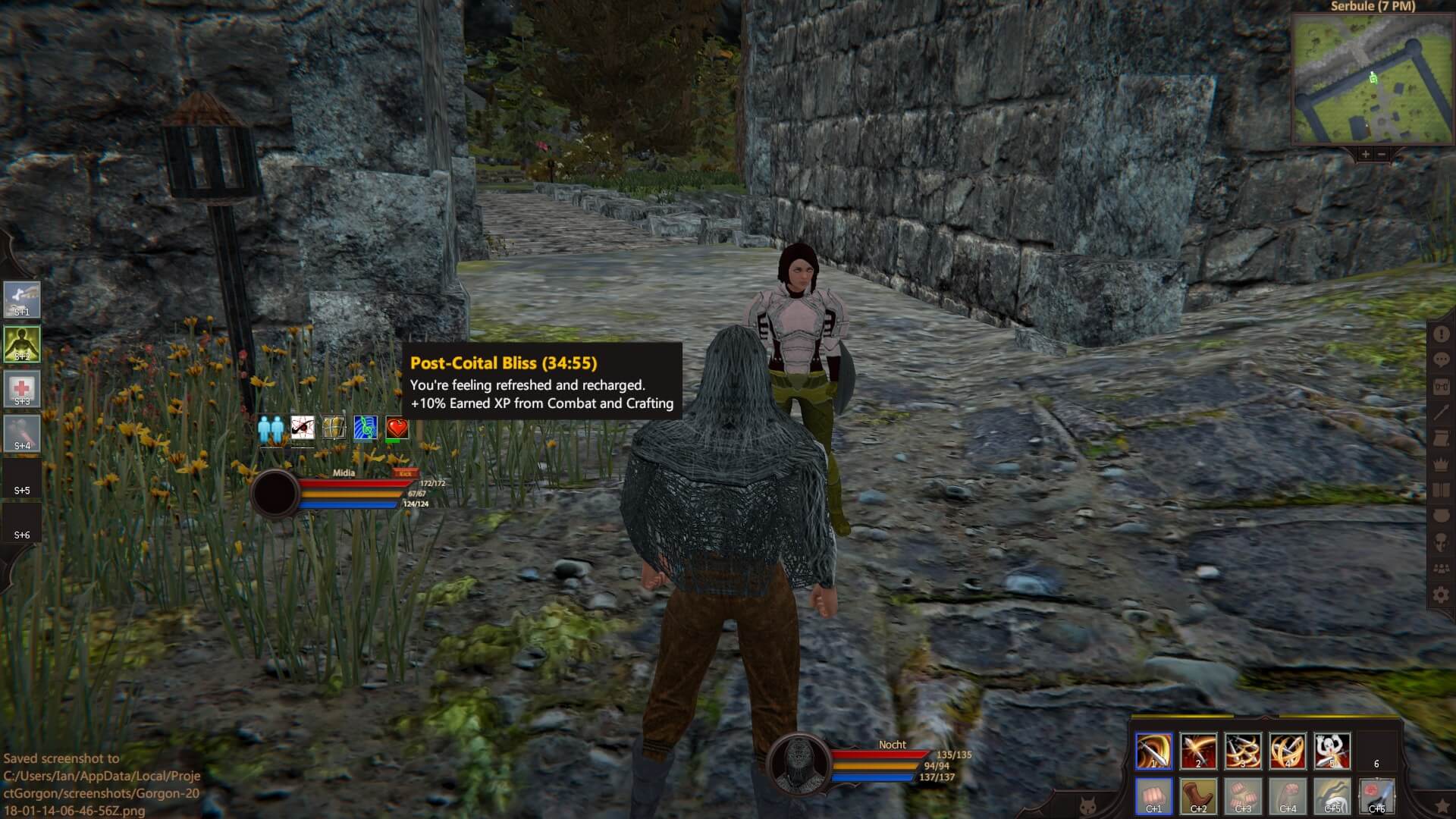 There is player trading throughout the world, you can drop items to let others pick them up, and there are vendor stalls, which are basically hired vendors to sell your items in a town’s market area for you while you’re off adventuring and if you’re logged off. Vendor NPCs, on top of having limited money to buy your items per day, will generally only buy things that would be of value in their store, otherwise they will pay you much less than regular rates. For example, if you try to sell a staff to a gardener, he’s not going to have any use for it and will offer you less than the item’s actual value. 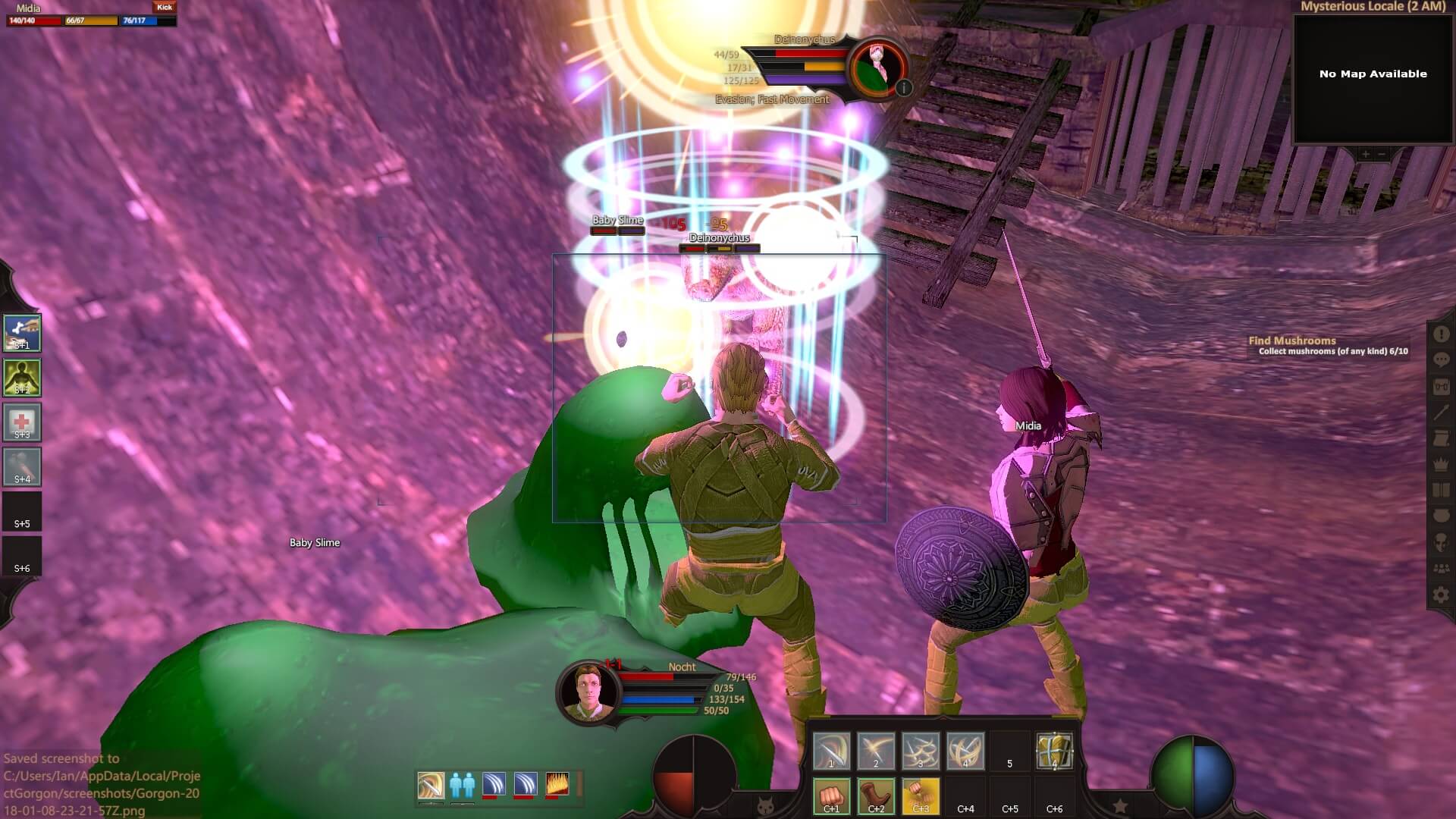 Obviously the graphics of the game are not anywhere near the standards of modern MMORPGs now, but what it lacks in aesthetic appeal, it makes up for with a world that is more alive than the majority triple-A MMOs I’ve played. Nevertheless, Project: Gorgon’s character models look extremely generic and outdated. The environmental graphics are passing, but all other graphical aspects like skill animations and other special effects are just a bit below tolerable. 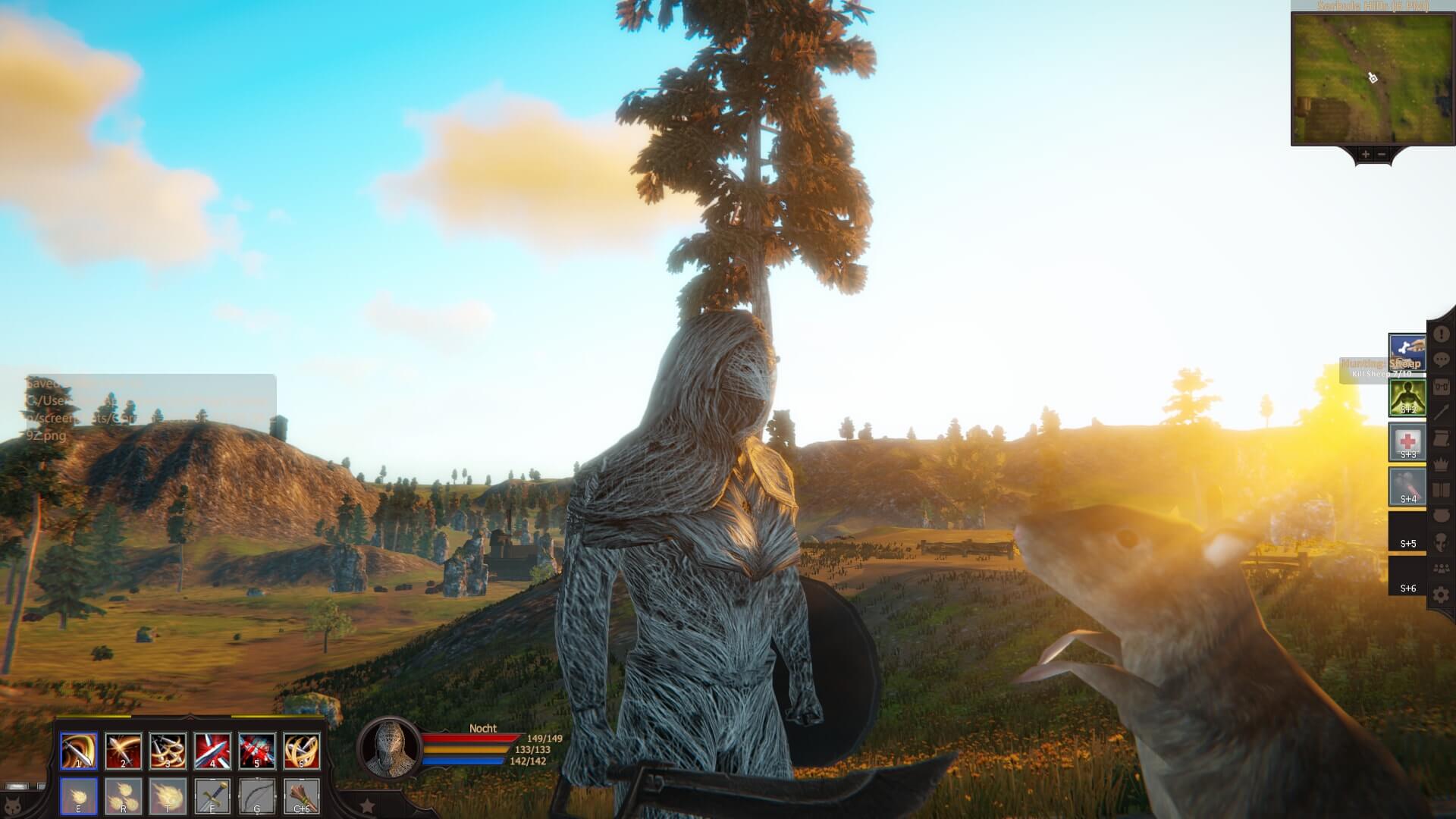 Project Gorgon is pretty bold when it comes to dialogue with low regards to censorship in order to provide realism with the game’s NPCs. On top of the usual violent nature and themes like war and racial stereotypes that we often see in MMORPGs, there are lots of swearing, references to drugs and sexually suggestive dialogue. This should be no surprise to anyone when they get into the game as this is apparent right from the beginning. It’s definitely aimed for a mature audience, however the developers have mentioned that there will never be overly dramatic gore or nudity. The world’s realism doesn’t just apply to profanity though. Chickens that roam around town lay eggs that you can pick up and use, deer try to flee when you startle them like they should and will only fight back when they’ve taken enough damage.

It’s The Little Things That Count

Paying attention to detail is how you progress in Project: Gorgon. I found that taking my time to go through the game is actually the best way to do it cause there is no hand-holding from the beginning. If you find yourself wandering inside a maze or dungeon without a map, there’s no escape button or recall to easily restart your journey. If you want to get out, you find your way out. A pretty small price to pay in my opinion as I much rather have a lot of content available for me right away and figure out how I can go through it myself rather than being mindlessly guided to level 30 to get access to one dungeon, then again to level 43 for another, so and so forth. 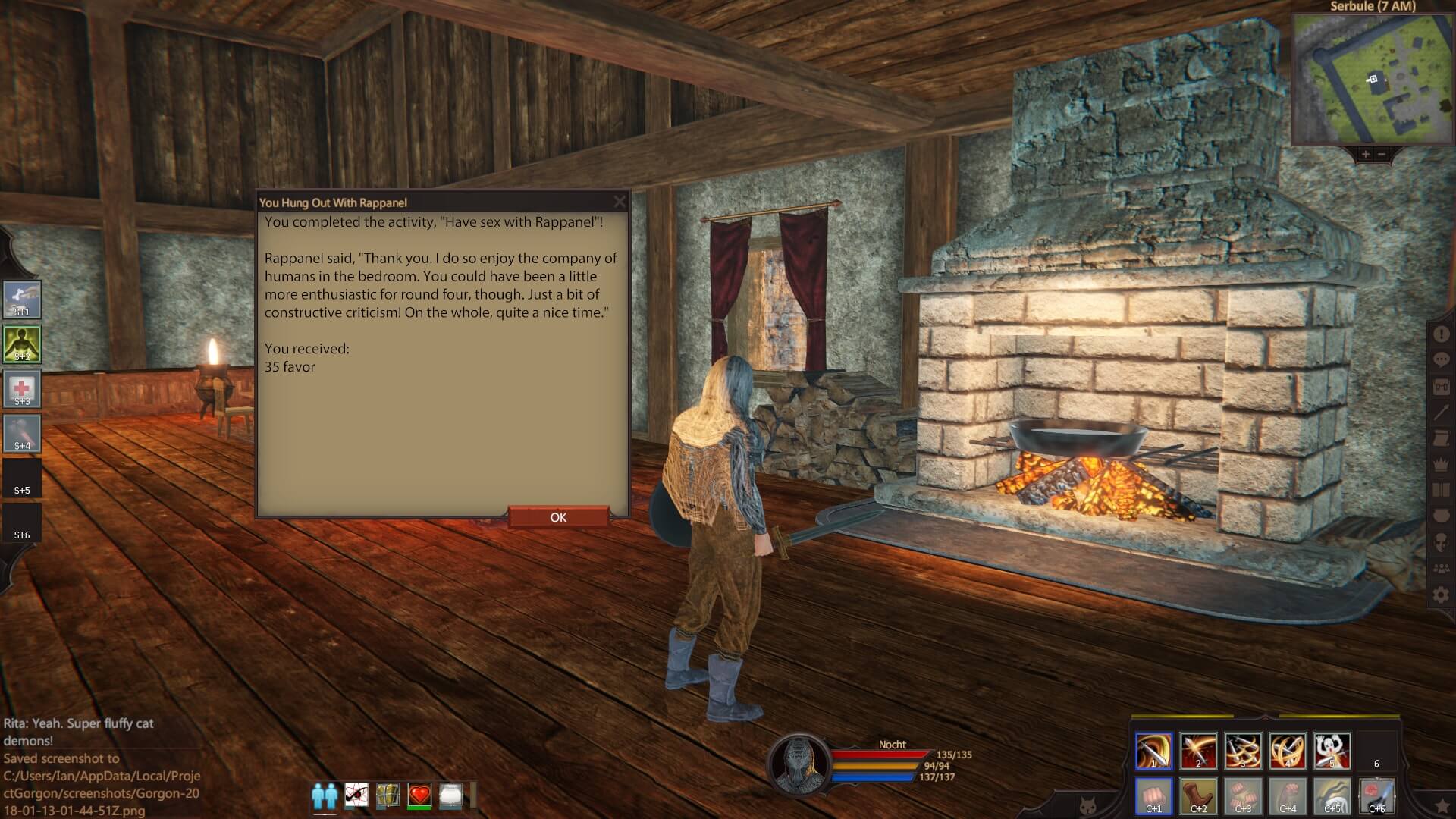 Say you get a quest from an NPC and they want you to collect deer antlers, it’s not handed to you on a silver platter. There’s no blue circle on the map telling you exactly where you can get them. You are forced to problem solve and figure out quests as you explore further into the surrounding areas. Is that a good thing? Personally, I think that it is, but I know it’s not for everyone.

To me, the one exception to the impressive world is the starting area. When beginning the game, before you can play in the open world, you land on an island with one given goal; do whatever it takes to get off the island. While it properly introduces the aspect of having to figure out how to progress in the game through puzzles and NPC hints, I feel that it contradicts the nature of freedom when it comes to activities that the game excels at past the tutorial island. On the island if you have a difficult time finding your way out, you don’t really have anything else you can do, just get frustrated and run around in circles. While on the main-land, if there’s a quest or NPC you feel are too annoying to deal with, there’s dozens of other activities only a few steps away.

A few other cool features I found out in my time playing is that Project: Gorgon’s UI is pretty impressive. Anything can be moved anywhere very easily, there’s tons options for fonts, and other UI features I feel all MMORPG releases should have by default. Another thing I found out is that the longer I hang out around people playing music, the longer I will get an EXP buff for my combat abilities. A pretty cool way to give incentive for getting together with other players. 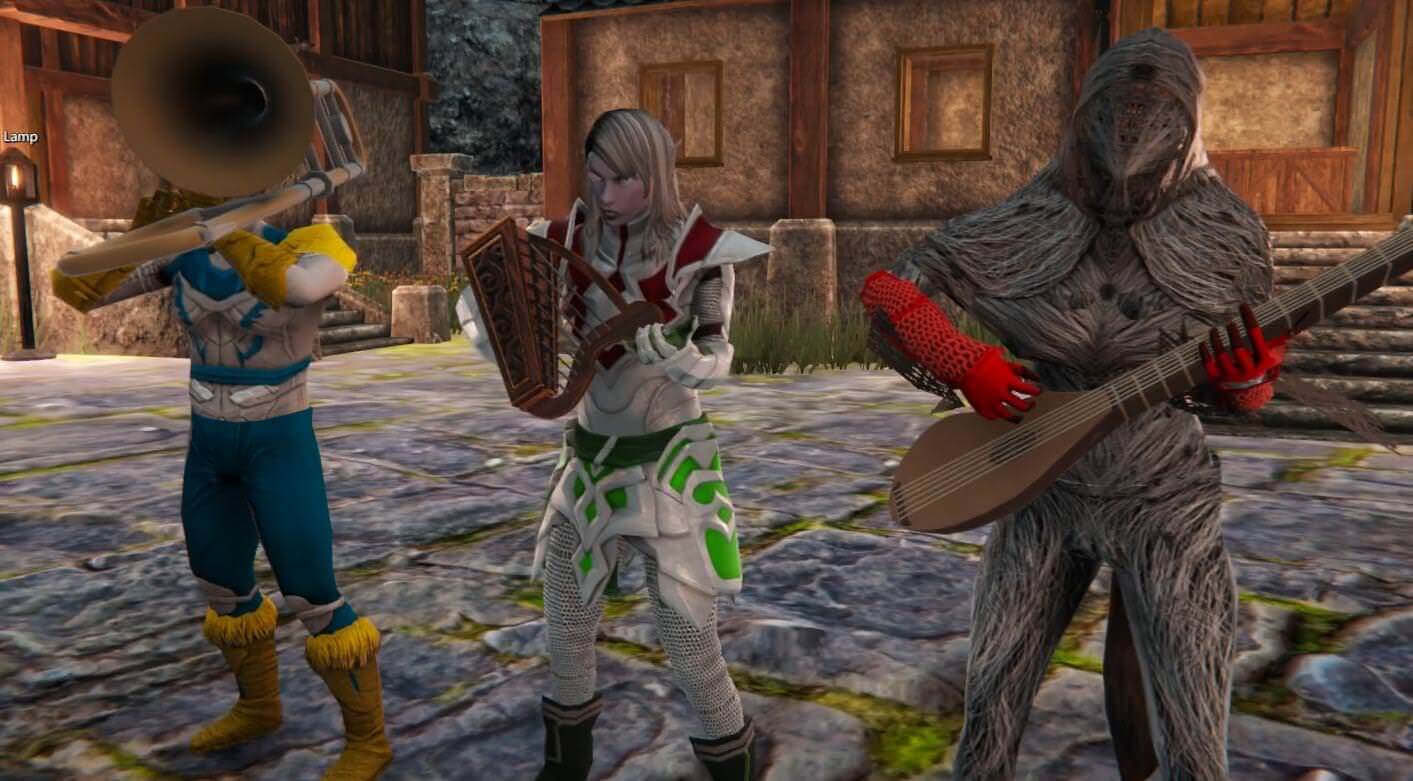 I love that there is no rush to end-game or some kind of point to reach to to get to the “fun” content. There is a huge emphasis on enjoying the journey more than the destination. That being said, there is a constant feeling of progress and there are hardly any shortcuts. This is a game that wants you to go out and check every little paper to find hidden content and do things in the world to affect others like reciting poetry publicly or writing a book and publishing it in a town’s library.

As much as the content is well varied, I can’t really get over the graphics. I just feel like, yes, I’m going to continue it cause it’s a fun game, but I’ve also been over this level of graphics for over a decade. I guess it could be good for players with low end PCs that don’t want to play terrible browser MMOs. There’s also hardly any character customization. For a game that lets you create your own journey as you please, I expected to at least be able to create character that doesn’t look exactly like 95% of the player-base. The gameplay is already good, so just by adding some aesthetics like a few more appearance design choices to choose from, they could really improve the experience.